Lou Uridel, owner of the MetroFlex Gym in Oceanside, spoke on Wednesday at a protest in front of his business. Uridel was arrested and cited last week after refusing to close and has since been released. (Don Boomer / San Diego Union-Tribune) A few fitness centers and gyms in Southern […]

A few fitness centers and gyms in Southern California are reopening, in some cases challenging California’s stay-at-home rules.

In Riverside County, the Self Made Training Facility in Corona reopened May 4.

The business is classified as a private training facility rather than a gym, so the opening complies with Riverside County’s health orders, its owner, Kelly Michelsen, said Friday.

Though the facility resembles a gym, it offers appointment-only sessions with personal trainers and is not open to general membership, she said. “We can control our environment and there’s not a lot of foot traffic coming in here,” Michelsen said. The training facility had been closed since March 20 and was not able to obtain economic relief funds, she said.

Michelsen was able to dip into personal reserves during the pandemic, but many of the personal trainers took a hit and wanted to get back to work, she said.

“I felt it was extremely important, especially during this time, that we spread awareness to people that long-term health is important,” she said. “I have private personal trainers that are very skilled in that.”

Since reopening, the facility has taken extra precautions, including checking temperatures at the door, having clients sign a waiver and wash their hands before and after sessions, and limiting capacity to eight trainers and eight clients per hour, Michelsen said.

She said she’s also placed markers six feet apart to encourage distancing between trainers and clients. She said business has been brisk, and she’s received nothing but support from the community.

“The private personal trainers have seen an influx of people that can’t go to regular gyms that are scheduling appointments with them,” she said.

A spokeswoman for the county said she was not aware of an exemption for private training facilities but deferred to the state.

California’s stay-at-home orders classify gyms and fitness studios as higher-risk businesses, which are permitted to reopen during Phase 3 of the state’s recovery plan. The state is currently in Phase 2.

At least two gyms in San Diego County — one in Oceanside and the other in Vista — reopened this week, despite county and state prohibitions. Both owners said they fear they could be forced to shut down at any time.

Oceanside police arrested Metroflex Gym owner Lou Uridel for opening his business on Sunday. He was released the same day, and reopened again Wednesday after holding what he called a “freedom rally” attended by well over 100 people in the parking lot outside his business.

He said Thursday that officers had warned him again that he could be cited for each day he remains open, but so far the police had taken no additional action and he had no intention of closing.

Uridel was only the second person cited in Oceanside for violating COVID-19 health restrictions, said police spokesman Tom Bussey. The previous arrest was several weeks ago, when lifeguards detained a surfer who ignored repeated warnings to leave the ocean before the county lifted the surfing ban in late April.

“Our objective is one of education and compliance,” Bussey said Thursday. “Most people are good about doing what is asked. We are trying to protect lives here.”

The gym was crowded with people working out on exercise machines Thursday afternoon. No one wore face masks, and few appeared to be maintaining a six-foot distance.

“The owner was warned and given copies of the state and county public health order,” said San Diego County sheriff’s Lt. Ricardo Lopez on Friday. “Since he chose to remain open, a case for violating [the order] was submitted to the district attorney’s office.”

“For the majority of the violations, deputies have been able to use education to gain voluntary compliance,” Lopez said.

Manager and co-owner Todd Danner said Thursday that since the warning, Sheriff’s Department patrol cars drive past the gym several times a day, apparently in response to phone calls.

Before its reopening, the Vista gym sent a news release to the media and city officials, stating that the business would adhere to all public health guidelines, hire additional cleaning staff and require members to declare that they have no COVID-19 symptoms and sign waivers accepting personal responsibility.

“We wanted to make it known we were opening up for the community we serve,” Danner said.

Tue May 19 , 2020
Children in the UK and across the globe have not been at school for some time, and this prolonged absence from the daily routine has given many of us a chance to think about what should happen when schools re-open. One way to address some of the ongoing problems of […] 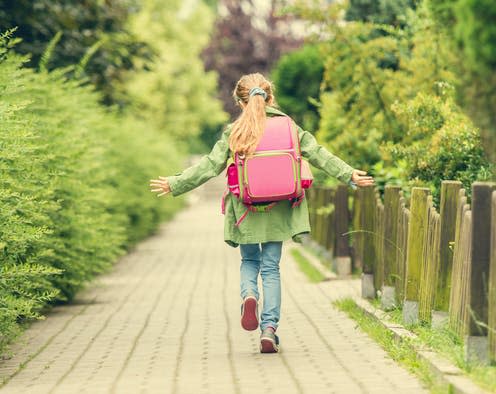